With his amazing personal beliefs and character, solo singer Eric Nam has once again become the topic of discussion among Korean online communities.

With his smooth yet powerful voice, his charming personality, and his quick wit, Eric has developed into a unique entertainer who’s skilled in both performing and hosting. Eric’s talents have helped rocket him into the spotlight, but his professionalism and caring personality have played a substantial role in helping him build his fanbase.

Behind-the-scenes intelligence on Eric Nam’s popular appearance on tVN‘s SNL Korea highlights his upstanding nature and awareness of social issues. Focusing on the skit in which he played a parody of popular cartoon Dragon Ball Z character Krillin, a fan explained, “There’s a story behind that Krilin cosplay ㅋㅋㅋ I heard from an acquaintance that works at SNL that he was supposed to dress up as Gandhi but he refused to use Gandhi in a joke. Next they said he should then dress up as Hong Suk Cheon but Eric refused again because Hong Suk Cheon is a sexual minority and in a country gay people are still very oppressed he didn’t want to make light of him.“ 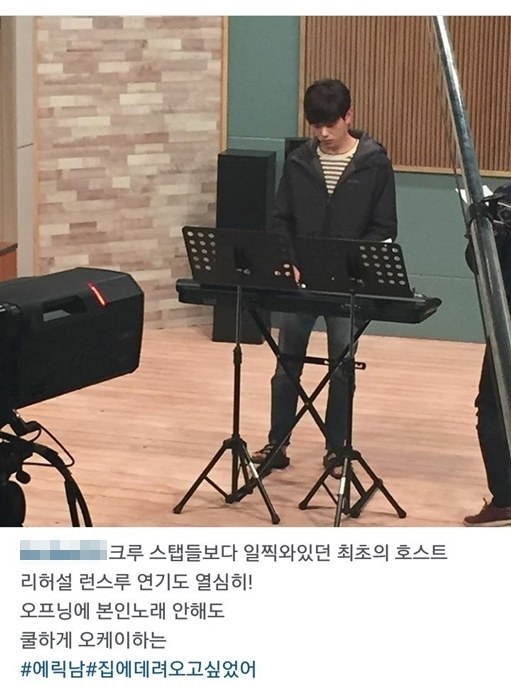 Eric Nam also talked about the situation in a recent interview, confirming the fan’s comments. He explained:

“When the script comes out I try to go over it first. Once, the script seemed like it required complete rewriting, so I just ended up being scolded. At times like this I just try to work with it and intuitively try to fix things.

For <SNL> there was a scene where I had to dress up as Gandhi in a comedic way and that felt really weird. If we see Caucasians pulling their eyes and saying ‘We’re Korean,’ we’d get offended. I felt like it was the same thing. That part of the skit ended up being changed.

Honestly the program <Gossip Man> on KBS was weird too. It involved me doing missions for 20 women to try to “win their heart.” That just makes both men and women look weird. I felt like I needed to make these things come to light so the producers would think ‘Are we doing something wrong?’ So I tell them my opinions after thinking it through first. Of course I can’t always do only what I want, but I try to be vocal about things that I think are ‘truly wrong.’ The best part about becoming more and more popular is that I can voice these things more.