During an episode of popular variety show Running Man, the cast members visited a fortuneteller to predict their futures.

According to the fortuneteller, member Lee Kwang Soo would have the most luck in the new year, followed by Yoo Jae Suk and then Kim Jong Kook. The unluckier members were revealed to be Song Ji Hyo, then Haha, with Ji Suk Jin coming in as the least lucky of the bunch. 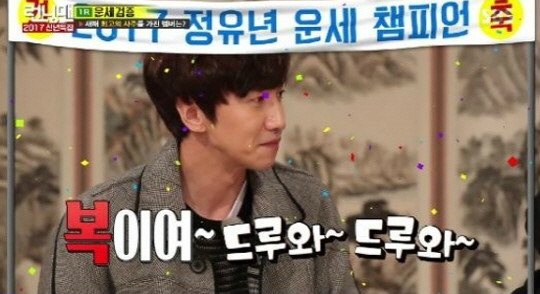 In addition to measuring their luck, the members also checked their compatibility with each other through the fortuneteller. According to predictions, Kim Jong Kook and Song Ji Hyo proved to be quite a pair, scoring 85~90 out of 100 in the marital compatibility.

With Gary’s departure from Running Man having effectively ended the “Monday Couple,” perhaps a new Running Man couple has been born.