The tweets were uploaded by one anonymous student of SBHS, and begged fans not to come to their graduation on February 11, as it would ruin their special day. They shared an incident as to how a fan dressed up as a reporter with a badge to gain entry into the graduation hall in SBHS’s 2016 graduation ceremony.

“I’m an attending student of SBHS and I’m graduating this year. Lots of people are contacting me about their [idol’s] class, or my class or my friend’s class so that they can see the 2nd graduation ceremonyㅋㅋㅋㅋㅋㅋㅋㅋ You can’t even come in so don’t try and dig for those answers. Don’t even think about coming. I don’t want our joyful day to get ruined by fans.”

The user had even uploaded a photo of their school identification card along with a handwritten note that read “Don’t come to our graduation please.” to prove that they really were an SBHS student. 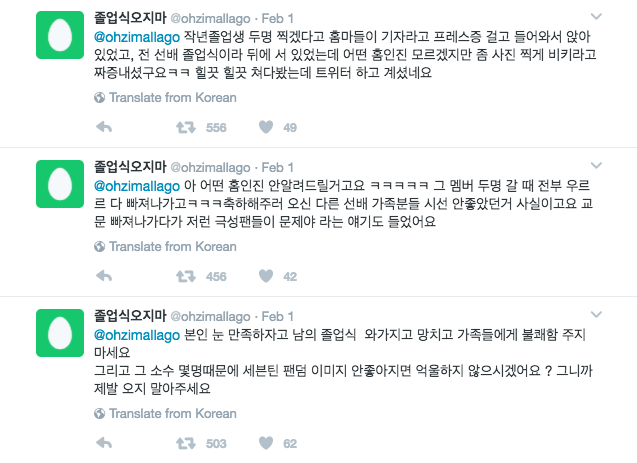 “Last year, these fans came and sat in the graduation hall by saying they were reporters and they even had reporters’ badges, just to take photos of two graduates. It was my senior’s graduation so I was standing behind these fans, but they were showing attitude and telling others to move so they could take the photosㅋㅋ I glanced over a few times and saw that she was tweeting.”

“Don’t inconvenience other families and ruin our graduation for the sake of your own eyes. Wouldn’t you feel bad for damaging the reputation of the (censored) fandom just because of those few fans? So please don’t come.”

“Oh and I’m not going to tell you who’s fans they were ㅋㅋㅋㅋㅋ When the two members left all the fans swarmed after themㅋㅋㅋ And it’s true all the family members who came to congratulate our seniors looked at them with scorn. I even heard some say that extreme fans like them were problematic.”

One other anonymous Twitter user replied to these series of tweets, by sharing their 2016 graduation experience at Hanlim Multi Art School. According to this user, fans of ASTRO were in attendance of the ceremony, and when members went to the bathroom, fans tried to enter as well.

“I’m a student of Hanlim Multi Art School and I graduate this year, but our graduation ceremony with ASTRO last year was a disaster… The captain was trying to control everyone but they were getting hit by cameras, and when the members went to go change outfits, fans even tried entering the male bathrooms” 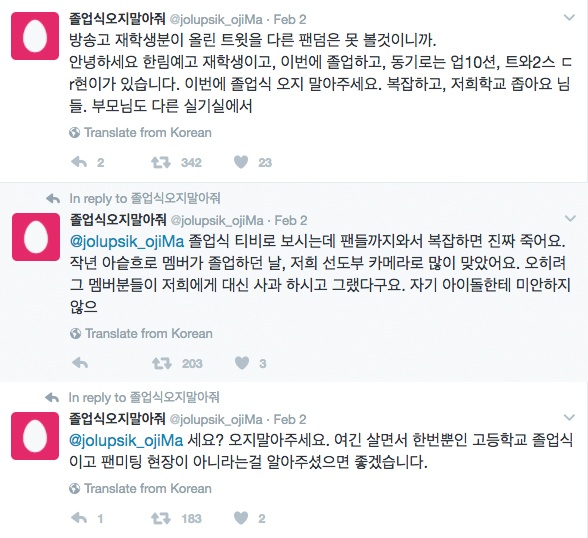 “Posting since other fandoms won’t see the tweets from the anonymous SBHS student. Hello I’m an attending Hanlim student, I’m graduating this year, and my classmates are UP10TION and TWICE‘s Dahyun. Please do not come to this graduation. It’s hectic, and our school is small guys. Even parents watch [continued]”

“our graduation from the waiting rooms by TV, and if fans come then it’ll suffocate us. Last year when an ASTRO member graduated, our captain got hit by a camera. That member actually apologized to us on your behalf. Aren’t you sorry towards [continued]”

“your idol? Don’t come. Please know that this is a once-in-a-lifetime graduation for us, not a place to hold your fan meeting.”

Fortunately, many fans who came across this online community board post agreed with these tweets, and expressed that they will strive to spread the word so that students of SBHS and Hanlim can enjoy their exclusive graduation ceremonies in the future.