Online publication Vulture dove into the growing culture of fanfiction and explored the latest trends on popular writing portal Wattpad only to find that K-Pop was among one of the fastest growing fanfiction subgenres.

The article delves into the most commonly recognized fandoms including Star Trek, Harry Potter, Sherlock, and Supernatural. The fanfiction world has become increasingly visible in general popular cultural culture and one Wattpad author, who now has a 6-book deals, points out that “E. L. James opened a lot of doors [for fanfiction]” citing the Fifty Shades of Grey author who originally penned the book as a Twilight fan fiction.

There are over 30 million fan fiction stories uploaded to Wattpad to date with 14 million shared in 2014 alone. By tracking tags on the website, K-Pop came in fourth in “Most Popular Fanfiction Fandoms” behind mega fandoms One Direction, 5 Seconds of Summer, and Youtube & Viners. 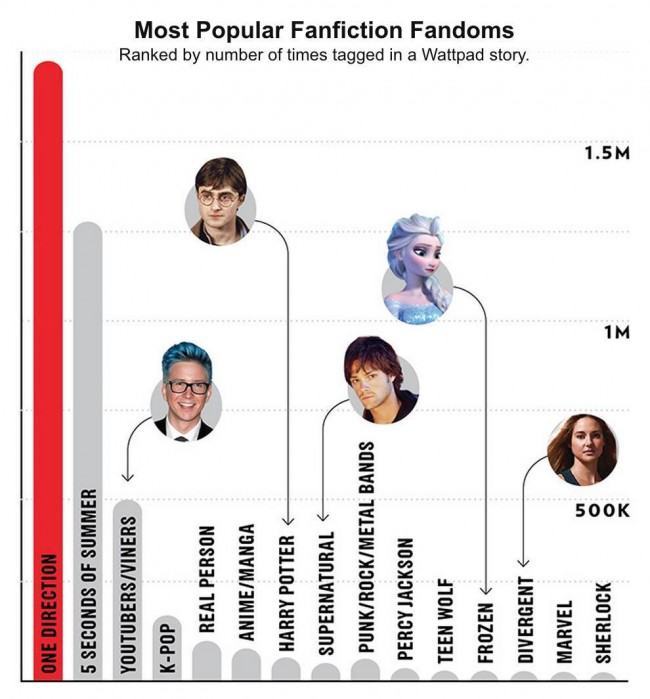 In addition, SM Entertainment’s hot boy band, EXO, was named “Fastest Growing Fanfiction Fandoms” on the site next to One Direction illustrating it’s recent explosive popularity with a 369% increase of stories posted in 2014 in comparison to the previous year. 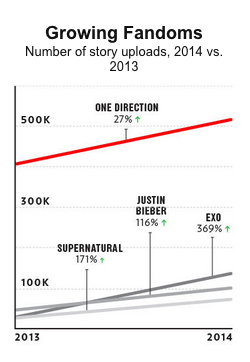 Wattpad is only one such fanfiction site and a majority of the fanfiction on the site is uploaded by users in the United States which limits it’s statistics to a specific audience. Despite these limitations, it is clear that K-Pop fans are one of the largest group of fanfiction writers and continue to grow with every comeback and debut.

Housed under the renown New York Magazine, Vulture’s online publication focuses on the the latest trends in popular culture and entertainment.