After fans noticed EXO‘s Chanyeol‘s poor performance during the most recent episode of KBS Music Bank, the singer sincerely apologized to fans and reassure fans.

Chanyeol left a lengthy comment on his most recent Instagram photo on April 3rd, revealing that he misunderstood the performance as a rehearsal, apologizing to fans, “I am really sorry.”

He was seen dancing at ease and wanted to save his energy for the live performance. “It wasn’t because I was in pain, so everyone please don’t be too worried,” Chanyeol said, “From tomorrow and on wards, I will only show you a cooler and perfect stage.” Read his full message below.

Meanwhile, EXO released the title track “Call Me Baby” for their 2nd album EXODUS on March 30th. Both the track and the album has been grabbing others’ attention as it was named one of the top tracks of March by Fuse. EXODUS on the other hand sold over half a million copies since its release, selling a total of 502,440 copies. 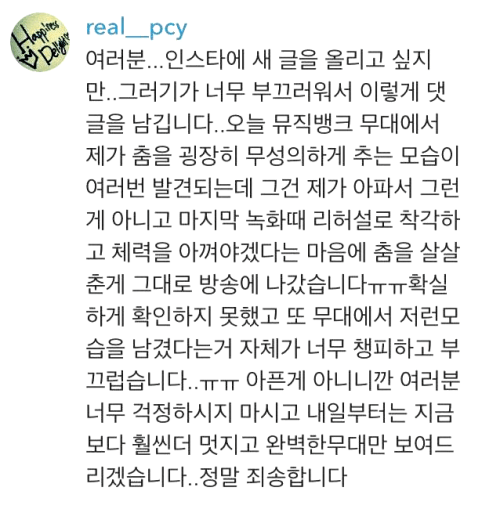 “Everyone…I want to upload a new post on Instagram..I am too embarrassed to do so, therefore I’m leaving a comment like this. Today at the Music Bank stage, I was caught in a few scenes dancing insincerely. That was not because I was sick, but because I misunderstood the last recording as a rehearsal, and didn’t dance my hardest thinking that I need to reserve my energy but it was broadcasted just like that ㅠㅠ I feel ashamed and embarrassed for not checking and having left such an image on stage.. ㅠㅠ It wasn’t because I was in pain, so everyone please don’t be too worried, from tomorrow and on wards, I will only show you a cooler and perfect stage..I am really sorry.”