Big Hit Entertainment has released an update after they declared a legal war against all BTS anti-fans who were spreading false rumors, defamatory remarks, and other harmful comments.

Big Hit decided to finally take action against anti-fans back on November 10 and after months of collecting evidence of malicious rumors and defamatory comments towards BTS, the company has released a new update. Their company statement is as follows:

This is Big Hit Entertainment.

Back in November 2016, we announced that we would be taking strong legal action against people who were spreading malicious rumors, false statements, and attacks to personal character online, and were hurting the BTS members and tarnishing the group and company’s image. We would like to let you all know the progress of the lawsuit.

Our company’s law firm has looked through over 240,000 pieces of evidence that was sent to us over the past few months. The evidence is classified under existing laws such as defamation, violation of information laws, and protection of member information. We have filed the lawsuit by summarizing the complaints corresponding to each category and will seek punishment.

Through our law firm, we will be requesting an official police investigation on the people who have made these malicious rumors, false statements, attacks to personal character, and are seriously hurting the BTS members. We will pursue all available means of legal action based off the investigation results and will make sure that there will be no way to settle.

Big Hit Entertainment will continue to take legal action with no intention to settle against the behavior of netizens who are constantly spreading false truths and making attacks on the members’ work, music, and private lives. 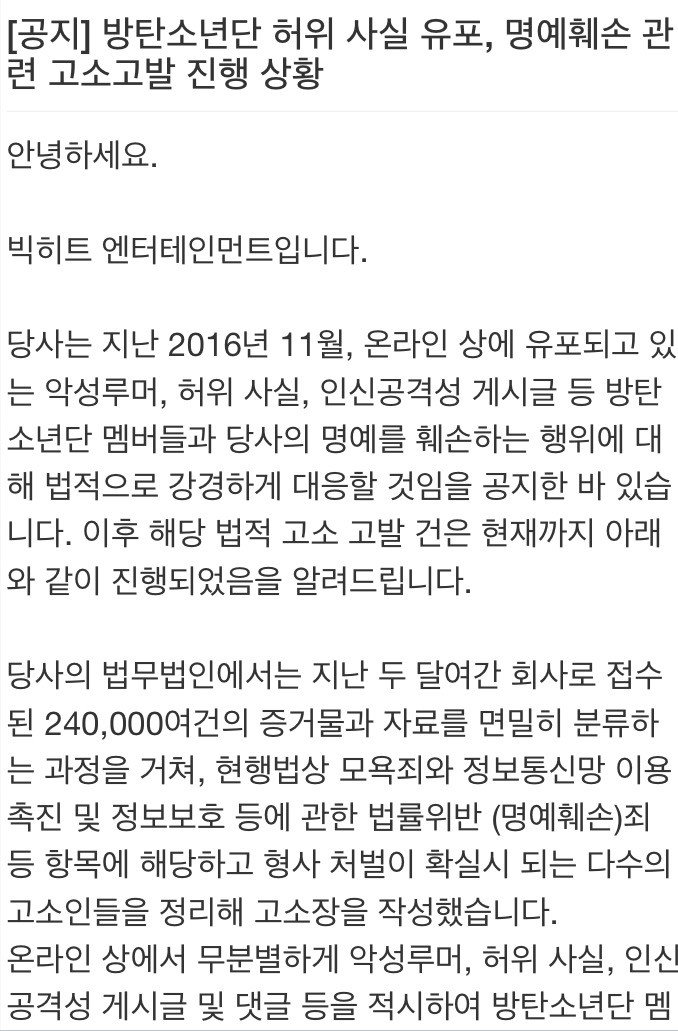