Actor Oh Jung Se revealed the story of how he married his first love from 6th grade on Happy Together, and it’s incredibly cute.

On Happy Together, Oh Jung Se once revealed the adorable story of how he met his first love in 6th grade, and eventually married her.

Oh Jung Se first explained that he met his first love in 6th grade, when their teacher told his class to pair up with whoever they liked. Oh Jung Se decided to pair up with his now-wife, because he had a little crush on her. 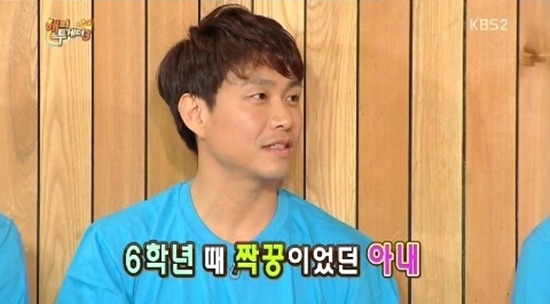 “I met my wife for the first time in 6th grade. We were told to pair up with the person we liked, so we paired up. We dated for 19 years, and broke up for just 3 months while we were dating. I proposed to her then. I told her that I had something to say to her, and asked her to come down to the lobby. When we met, she said, ‘Why? Are you going to ask me to marry me?’ So I said ‘Yeah’. That was my first and last proposal.”

He also revealed that they used formal Korean to each other, despite being of the same age. A few couples in Korea have been seeing a trend where couples continue using formal language to each other, as it is effective in dissuading arguments from arising, and also helps in solving disagreements more easily.

However, he invoked laughter among the guests when he explained that she uses informal language when she’s angry at him.