On a famous Korean online community called Pann a post that claims to reflect international response with regards to IU’s ‘Zeze’ controversy has recently gained much attention from Korean netizens.

Below are the comments gathered in the original post:

I would genuinely question her mental health if it was revealed that she wrote those lyrics AFTER reading the book… but i doubt she actually read it. :/ i hope.
———
Wow, it’s my first time of seeing Zeze lyrics. Who the hell wrote them? The kid was abused extremely cruelly by his dad and the lack of affection made him rebel. She sees this as charming and sexy??
———-
It’s not blowing up because it’s IU. If it was an other artist, they would’ve became another Yewon.
————
I’ve always sensed that she’s sexual. I think she likes lolicon concept.
———
As someone who grew up with this book… Is disturbing.
———
I had the same thoughts lol wow. but literally everyone loved her and if I drop 1 comment about disliking her, I’d be bombarded to death
———–
Her song was based on the orange tree’s persoective towards Zeze right? That’s so creepy thinking that the orange tree was his only ‘friend’ that he could escaped from an abusing parent but she portrayed the orange tree as in that pervert pov ugh that’s gross
———
i understand the whole concept what i was asking is how is this scene of her sucking on bottle become such a big issue? :O isnt this portraying the lyric “i want to stay baby forever” ?
——–
Just like what she said on the interview: I wrote the song with a lot of possibilities of interpretations. So this interpretation is might be true… Creep.
——-
lolicon concept aside, how can anyone possibly think that iu exploring her sexuality by sexualizing a 5 year abused kid even ok? that really is something else…
————-
Because she’s IU. As one of the comments said, if this was another female idol, she’d be T-ara or Yewon 2.0.
———
they’re reaching
reaching for the sky. 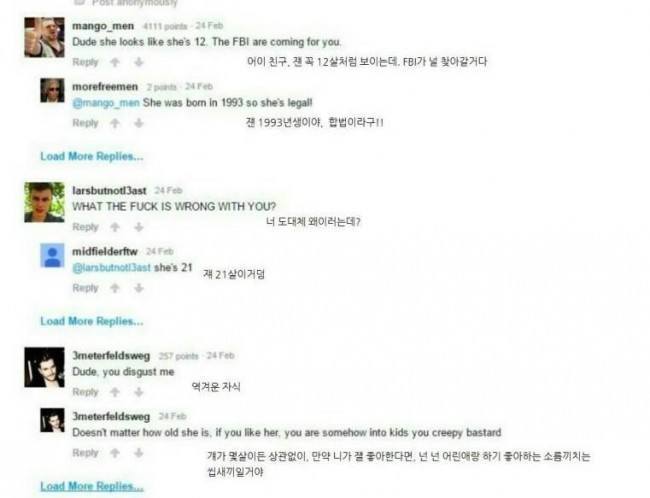 [+ 251, – 6] Is that the from teh US? Even in prison they don’t treat pedophiles as people so I guess this is expected. They are a lot more subjective than this.
[+ 220, – 12] There was a photo shoot in the states where a woman was wearing babyish clothes with a flower shaped perfume bottle. The photo was called out for promoting pedophilia and it got shut down.
[+ 136, – 1] IU fans claim that IU was simply portraying Zeze’s duality as sexy and cunning. Do you think it is normal for them to portray a duality born out of abuse in such a manner? Think about it seriously. I seriously question IU’s standards if she still does not think there is anything wrong with her perception of the book. She posted a crude apology because of the fan sign event yet she had a big poster of her album jacket at the fansign and played ‘Zeze’. Shocking.
Source: Pann