JTBC‘s Non-Summit‘s star, Enes Kaya, is currently under fire after various online posts were revealed of his scandalous conversations with Korean women. What is even more shocking about these posts is that Enes Kaya has previously revealed on the show that he is married, yet he has been talking and flirting with various women via Kakao Talk and various other SNS sites.

The first woman (hereby known as “A”) posted these pictures along with a caption on November 30th, “Enes Kaya apologize to me and apologize to your wife. Change the way you live. I get furious when I think of how you played me, I feel dirty. As a woman and a Korean I feel sorry for your wife. Lies don’t last forever. If you’re married be loyal, if you can’t be loyal don’t get married. I hope no one else gets fooled by you and those who are calling me a liar and rumor creator shut up please. Things haven’t been confirmed. If you want to talk to me, log in and talk. Don’t just leave comments as a guest.”

Below are the Kakao Talk screencaps between “A” and Enes Kaya, translated by Koreaboo: 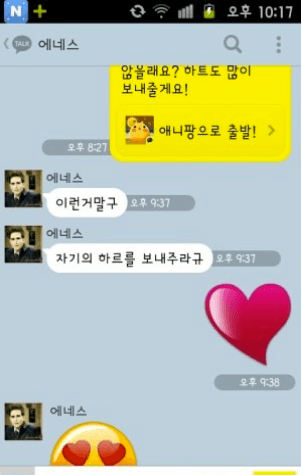 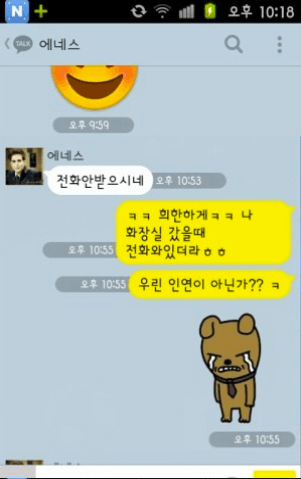 Enes: You’re not picking up
A: ㅋㅋ It’s weird ㅋㅋ whenever I go to the washroom you call me ㅎㅎ
A: May be we’re not meant to be?? ㅋ 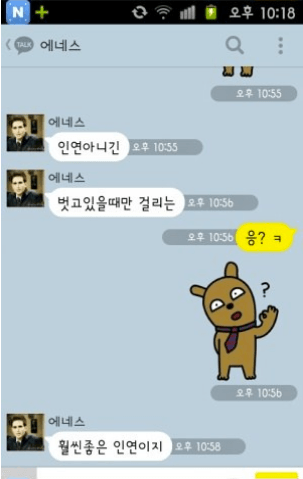 Enes: What are you talking about
Enes: It means you’re naked whenever I call you
A: Huh? ㅋ
A: *clueless emoticon*
Enes: It’s the best kind of destiny. 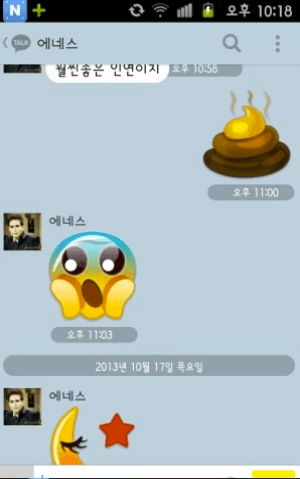 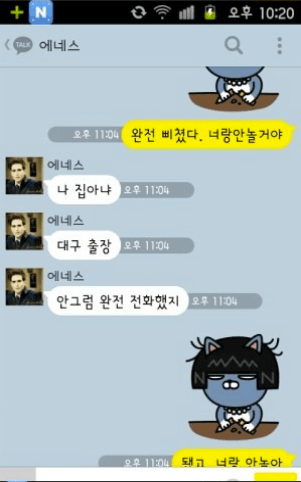 A: I’m mad at you, I’m not gonna talk to you.
Enes: I’m not home
Enes: I’m in Daegu for a business trip
Enes: I would have called you otherwise 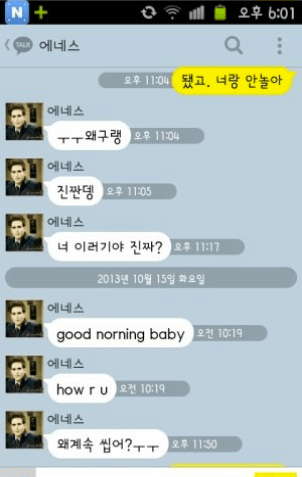 A: I don’t care, I’m not going to play with you
Enes: ㅜㅜ why
Enes: I’m being honest
Enes: Are you really gonna do this? 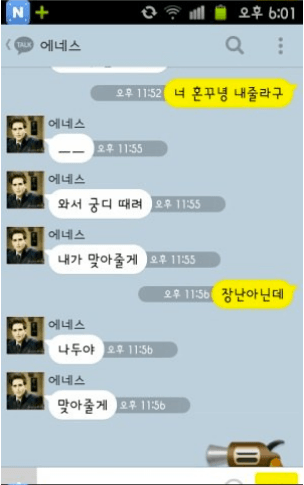 A: As punishment
Enes: – –
Enes: You can come smack me in the ass
Enes: I’ll let you
A: I’m not kidding
Enes: Me neither
Enes:I’ll let you spank me 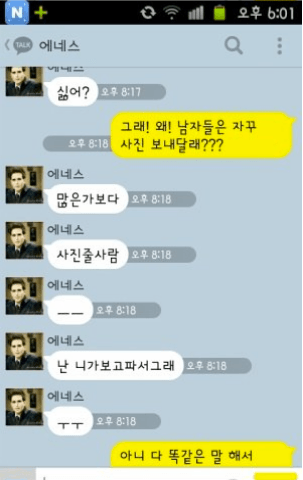 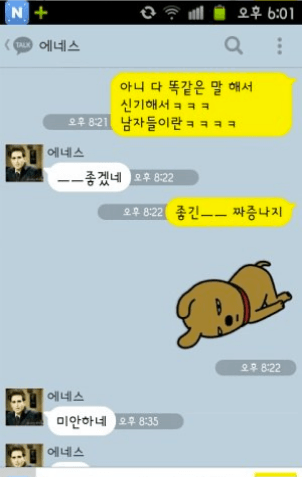 A: No, I thought it weird how guys all say the same things ㅋㅋㅋㅋㅋㅋㅋㅋㅋㅋㅋ
Enes: – – good for you
A: Not really, it’s annoying
Enes: I guess, I’m sorry then 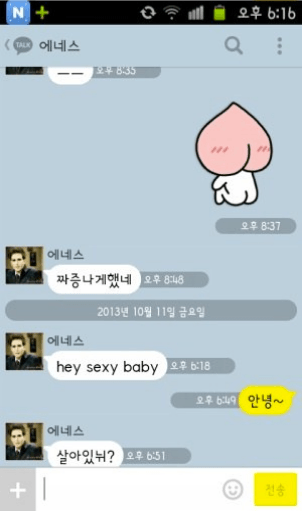 Enes: For annoying you 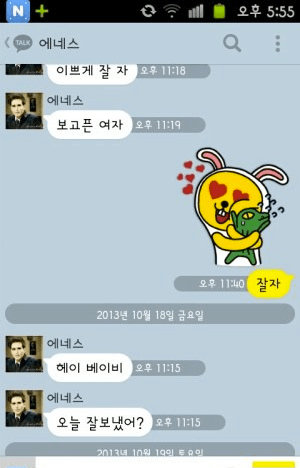 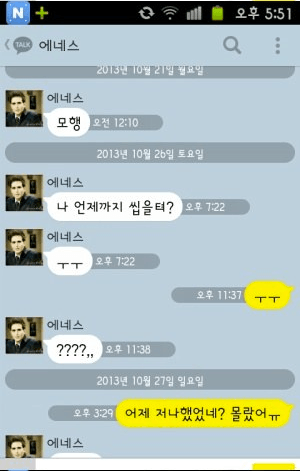 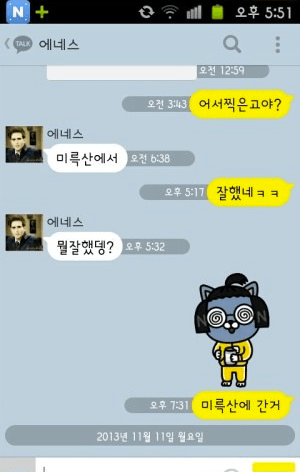 A: Where did you take the picture?
Enes:  Mount Mireuk
A: Good job
Enes:  Good job for what?
A: Going to Mireuk mountain 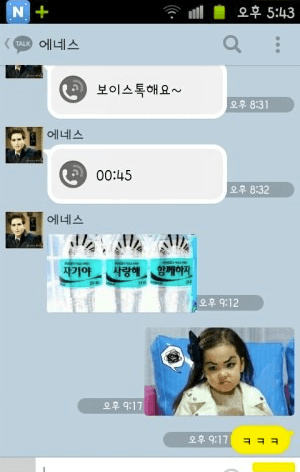 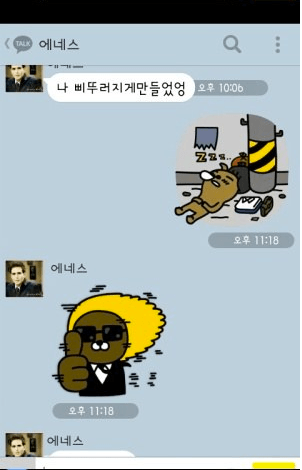 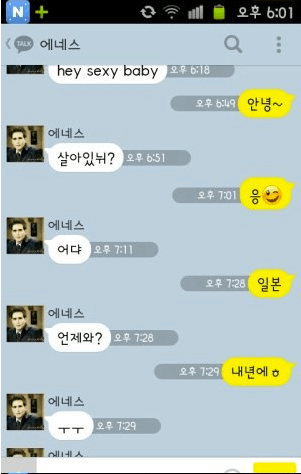 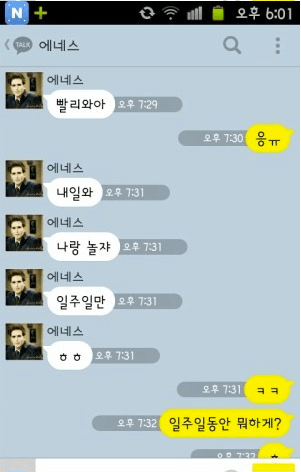 Enes:  Come back sooner
A: okay ㅠ
Enes:  Come tomorrow
Enes:  Play with me
Enes: For a week
Enes: ㅎㅎ
A: ㅋㅋㅋ
A: What do you want to do for a week 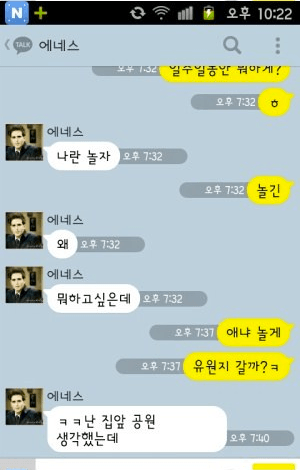 Enes: Play with me~~
A: what do you mean play
Enes:  why
Enes:  What do you want to do
A: Are you a kid
A: You want to go to an amusement park?
Enes:  I was just thinking a park in front of the house 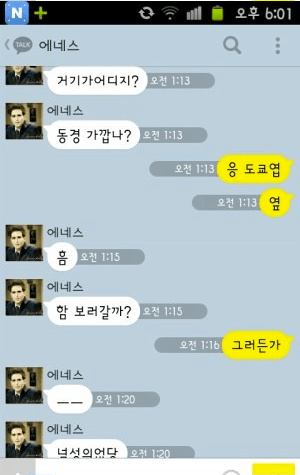 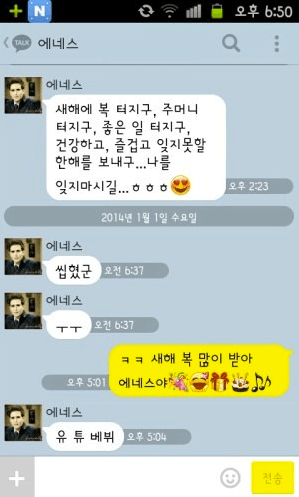 After posting these screenshots, “A” continues to say, “These are just couple of screen shots. The order is mixed up but don’t doubt the authenticity of me or the Kakao Talk  account. This is Enes’s actual account with his real phone number.”

There were also additional Kakao Talk posts by a different woman (hereby known as “B”) uploaded on the Non-Summit forums with the title, “Don’t live like this Enes.” This woman posted these pictures stating that she thought they were in a relationship, and that she only found out that he was married after she saw him appear on TV stating on the same episode he was married.

She posted a text along with the pictures, which Koreaboo has translated.

1. Some might say we are just close but honestly most people would think we were a couple and I did as well. I guess it depends on the perspective.

2. I have a lot more photos, I will upload them later.

3. It’s not just the Kakao Talk we exchanged, I know his number as well.

4. He told me his name was Nick. His nickname and Kakao Story name was NS.K. I didn’t really think much of it back then, but I got chills when I saw him on TV and realized what it meant. I can’t say for sure but I couldn’t help thinking he did this a lot and that’s why he used a fake name..

5. I saw him on TV by coincidence. ( I really don’t watch TV that often). I thought wow oppa’s on TV (He mentioned that he did TV as a side job, so I wasn’t surprised). I saw his name was Enes Kaya but he had told me he was half Turkish- half Italian so I accepted that too but…HE was MARRIED??????

Hul….Daebak;;; I was so shocked

(He probably doesn’t even know it’s me writing this. Well he might if he sees my Kakao Talk)

I pretended I didn’t know and started talking to him less and less and distancing myself.

I found out everything about him on the show he was on.

And searched him. I just got played but I am at fault too, god the world is scary….

People kept doubting her story so she uploaded pictures and voicefiles of Enes as well with this link: 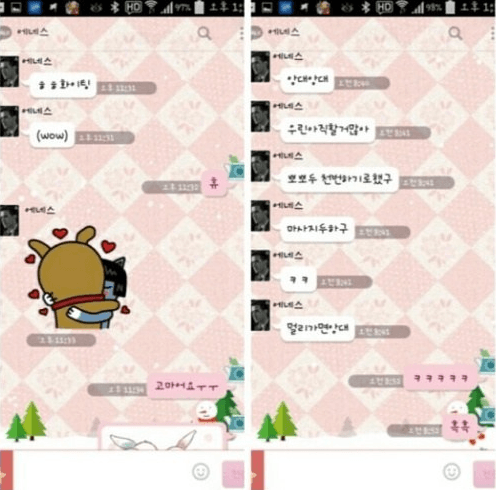 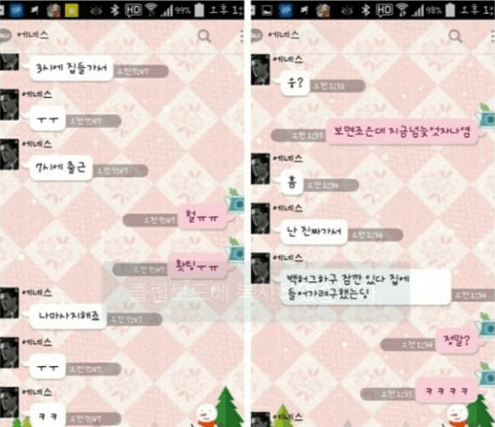 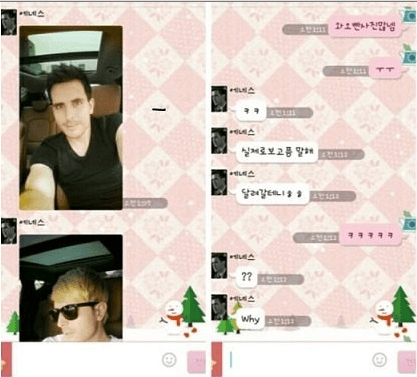 Below is a post by yet another woman (hereby known as “C”) and B’s reply to it: 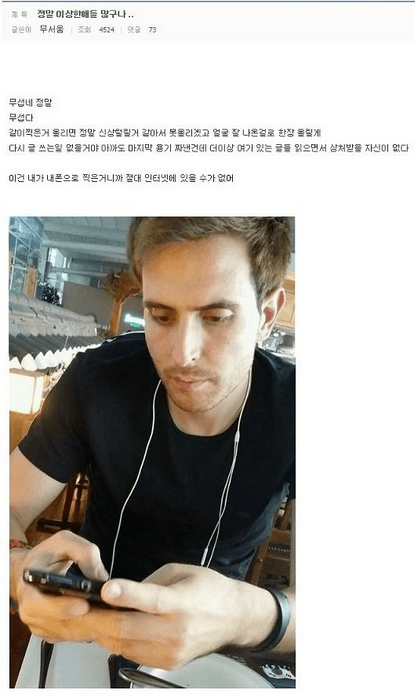 “Scary, this is really scary.

There is no way this is on the net because I took it with my phone.” 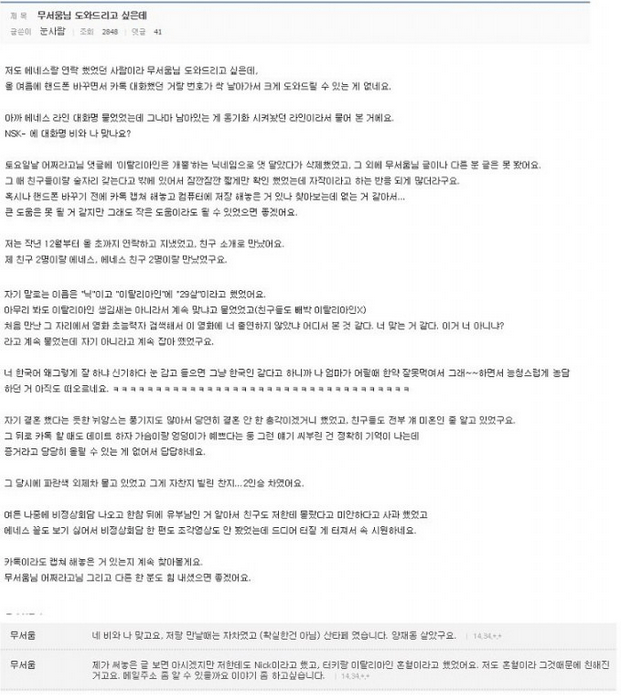 B: I used to talk to Enes and I want to help you. But I changed my phone, so I don’t have much evidence. I heard about Enes’s line ID some time ago.

I still have line because that was embedded into my phone. Is he NSK-Rain and me?

On Saturday I checked on the post here and there and saw people were criticizing you saying that this is fake and I’ve been looking for evidence but I couldn’t find any. I will help you in what little way I can.

I met him early last December through a friend. Me and my 2 friends were with Enes and his 2 friends.

I searched up the “Haunters” and asked him if he was in it because I thought I recognized him but he kept saying no.

I told him he was good at Korean and that if I closed my eyes he sounded like a Korean. He joked that his mother fed him oriental medicine when he was young. ㅋㅋㅋㅋㅋㅋㅋㅋㅋㅋㅋㅋㅋㅋ

He didn’t even hint at the fact that he was married, so me and all my friends thought he was single. He messaged me asking me on dates, telling me my breasts and ass were pretty, but I don’t have any evidence of those things..

He drove a blue foreign car back then, but I don’t know if he rented it or it was his, but it was a two seater.

I found out later when he was on ‘Non-Summit.’ My friend apologized saying she didn’t know he was married. I’m so relieved this was revealed. I didn’t even watch the show because he disgusted me.

I’ll keep looking for evidence fighting to all the victims!

C: Yes it was Rain and me. He had a Santafe when we used to meet (not 100% sure if it was his). He used to live in Yangjae, and as you can read, he told me his name was Nick and he was half Turkish and half Italian. I got close to him because he said he was half. Can I get your email, I would like to talk more. 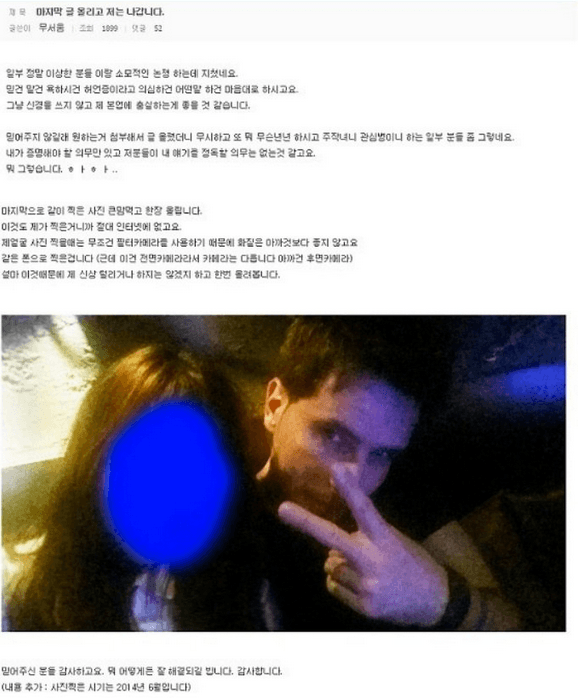 I am tired of arguing with a few weird people, and I don’t care if you believe me or believe that I’m a compulsive liar. I would rather forget about this and get back to my life.

The last photo is of me and him together. I’m uploading this after much thought and since I took this photo, it won’t be anywhere on the internet.

I use filters for selfies so the picture quality is worse. It was by the same phone, but I used the front camera so it might seem different.

I hope this doesn’t end up revealing who I am.

Thank you to those who believed me and I hope everything goes well.