A cryptic image was uploaded on November 10th to Boys Republic’s official Facebook page, with Clara holding up a sign stating the name of the boys’ album, Real Talk. This, along with a caption saying “The next star for the #Real Talk has appeared? None other than #Clara!”, has lead fans to guessing whether or not this means she is to be a featuring artist on the highly anticipated mini album. 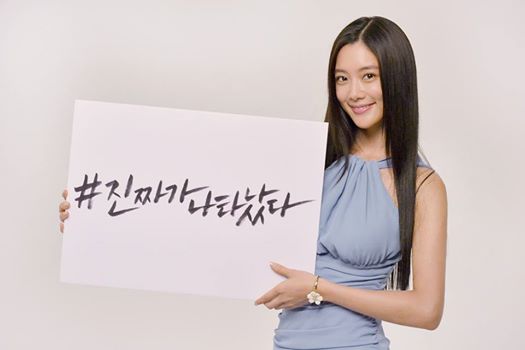 This is to be Clara’s second promotion as a singer, following the release of her debut single “Fear”, featuring Yasu. Originally, Clara first appeared on the Hallyu scene as Cha Hye Jin in KBS 2’s 2006 drama, Invisible Man, Choi Jang Soo. However, it was 2013 when she gained mass recognition after she threw the ceremonial first pitch at a baseball game while wearing well-fitted leggings. She has then continued to gain more and more popularity, despite a few bits of criticism, and has even reached 2nd place in Mode Lifestyle Magazine’s “World’s 100 Most Beautiful 2014” list.

The image is part of an impressive line-up of teaser shots of the members of Boys Republic, following the dazzling individual shots of the members Sunwoo, Sungjun, Suwoong, Minsu and Wonjun that were released on November 8th. The boys have been garnering a lot of attention and love for their youthful image since their debut in 2013 with “Party Rock”, and have recently been appointed the 2014 ambassadors of the Korean Federation of Youth.