A recent post on Pann has caught much traction in describing AOA Chanmi’s loving personality.

Fans have recently documented the dedication that AOA’s Chanmi has for fans through various interactions with other fans. The girl group has gained favor for their bright and sexy concepts and now capture the hearts of fans through their fan service.

Check out some posts here:

This fan report reveals that during a handshake event with AOA, she revealed to Chanmi that she was deaf. At a following event, Chanmi remembered this fan and used sign language to say “You’re pretty.” The fan tweeted the message above expressing her surprise and delight.

Chanmi also posted a photograph of a YouTube video, showing that she listened to a song written by a fan.

The Pann article also noted that Chanmi often posts updates about puzzles or other gifts that her fans have given her. 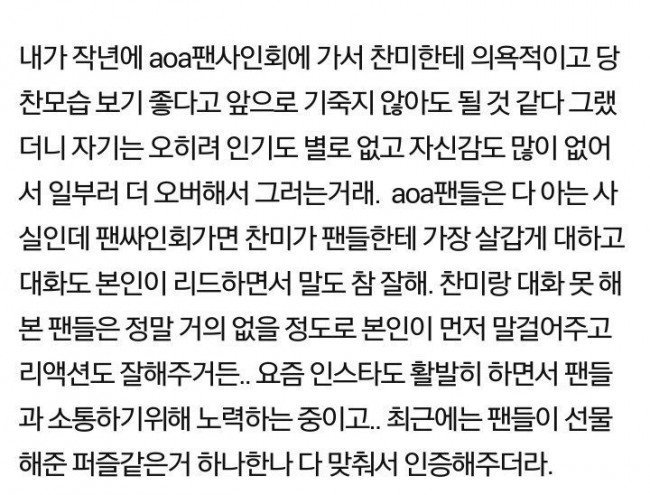 Another fan account details her genuine caring for fans: “Last year, I went to AOA’s fan signing and told Chanmi that I like how she’s always full of determination and confident in herself However, she replied that she’s actually not that popular and has low self esteem so she exaggerates her actions to look like she does. AOA fans all know this but Chanmi’s always the one who’s nicest to the fans and always tries to lead conversations, striking up topics and reacting to what they say. She’s also active on Instagram to communicate more. Recently she put up a proof shot of completing a puzzle that her fan had gifted her.”

Are You Compatible With BTS Jungkook’s New MBTI Type?